The idea for this project came from the desire to replicate Marano’s traditional lagoon buildings: the “casòn maranese”, buildings that can be described as “spontaneous”, examples of which can be seen dotted around the mouth of the River Stella. With this in mind and having visited the “Venice Bookshop” Pavilion created by the master architect James Stirling for the 1991 Venice Biennale, the idea was born to reinterpret the guest house concept, making it blend in perfectly with the surrounding environment.

The building narrowly rises up between rows of trees and it is camouflaged in the environment of the surrounding park. The shapes and materials strive to appear like a familiar presence in the area. The façade facing the Nature Reserve features local wood varieties and the hall has also been made using the typical materials and shape of the local fishermen’s huts (“casoni maranesi”). The cladding on the side of the building facing the road has also been made using local wood varieties. The building has been constructed with its main shape based on a linear floor plan, with just one spacious floor stretching along the north-south axis. The issue of having to bring together elements that are formally and structurally independent is resolved through the use of different materials that gain their expressive force precisely from their juxtaposition, from their contrast, from their varying thicknesses and textures and from the careful design of the joints. The design underlines how this respect for space along the north-south axis acts as a guide for the layout of the perimeter buildings, representing a link between the boundary road and the conservation area.

The settlement system has a range of functions: on the one hand, it marks the continuity of the walkway along the design axes and, on the other, it recreates public areas to reflect project continuity. This project involves the construction of a building in line with the axes of the design and those of the perimeter. The building corresponds to a floor layout that fully respects what was there before. The main aim was to create a new meeting point for urban life, without forgetting the traditional characteristics and shapes of the ancient village. Instead of rising up as a monumental image of a public building, this construction prefers to position itself, with its light roof, along the side of the road, acting as a haven open to all, extending out towards the outside world, gathering an essential quality from the surrounding environment: light, from which it takes shape. » the control of natural light governs the entire composition, from the positioning of the spaces to the design of the different sections, right through to the expressive nature of the structural solutions.

Considering the experience developed through building the visitor centre huts, which require continuous and expensive ordinary and extraordinary maintenance work, it was decided to create a building using traditional materials, developed in a modern way with a focus on saving energy and using alternative sources of energy, as well as low construction and maintenance costs. The building is modest in size (measuring approximately 27 x 17 m and just about reaching 8 metres at its highest point); the protruding gutters cover the external perimeter that runs along the building’s three glass façades. The roof therefore creates continuous “cones” of shade along the glass façades, which means that the building does not require external closures such as shutters or balconies, allowing the building to appear “cleaner”. 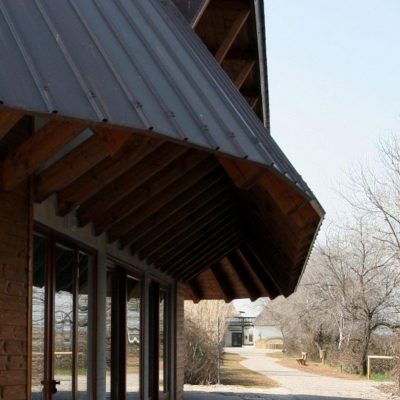 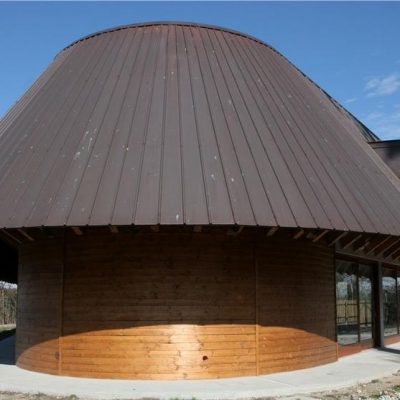 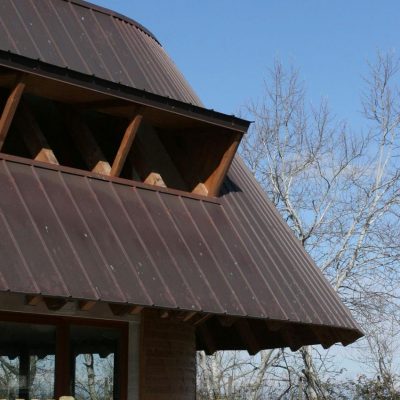 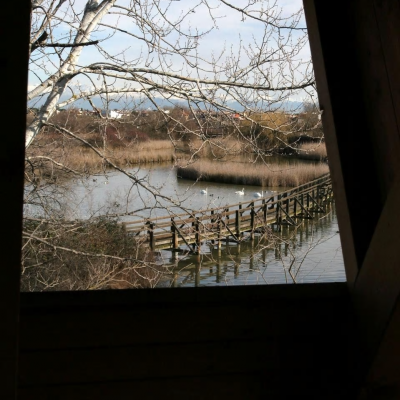 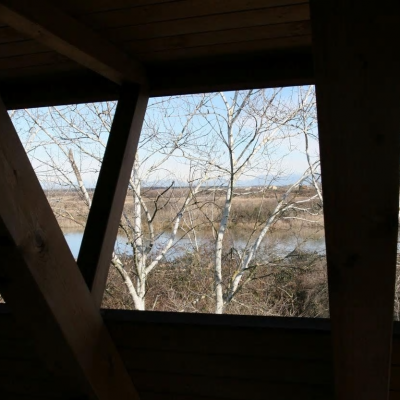